skip to main | skip to sidebar

Getting lost in my Garden

Its almost the end of October - late spring/early summer in the Western Cape, here at the tip of South Africa.  We have had more rain than usual, in actual fact the most we've had in many years.  BUT, despite the lack of endless days of sunshine we normally have now, the copious amounts of rain is one of the greatest gifts any gardener without a borehole can receive.

Less time on the computer, less blogs, (sorry about that), less times at the shops but more time in my garden, especially as I am preparing to be part of Helderberg Hospice forthcoming Open Garden fundraising event.

Anyway - just a quick glance at the accumulated photo's on my computer is enough to get the motivation juices going to head back in the garden.  Here are a few of my favorite photo's -  no particular order.

In 1994 when we bought this property it was in a state of neglect and there often were times when sat in a heap of despair on a dust patch somewhere wondering what the heck I was doing and I wondered about the secrets of successful gardening.  Not wanting to admit defeat, I persevered through trial and error and advice from the few gardeners I knew. My biggest inspiration came from the late Una van der Spuy, the Doyenne of Gardening in South Africa, whom I met a while after sitting in the dust patch.  I was fortunate to see her a few times the last couple of years.

The amount of abalone shells in my garden (the  previous owners were avid divers and obviously loved diving perlemoen when it was still legal, and I found hoards of them all around).  Initially I was so irritated about this messy clutter, that I used them as fill in some spots.  Later I saw them in a different light, especially since they have become endangered.  Now they are dotted all over and gives me such pleasure looking at them.


This little creeper (I hate to confess when I don't know a plant's name - but this is one) - rambles around in my courtyard and every year wraps herself around all sorts of elements with purple splendour.   I think I'll call her 'trompettertjie' - meaning little trumpet.
Here Trompettertjie is in the process of growing a garland around my favourite little statue.
I find bird's nests dislodged by the wind irresistible and like to tuck them into a corner - here it has turned an old tilly lamp into a piece of artwork in my opinion.

A merry mix of elements in my courtyard.
Trompettertjie and the statue have become inseparable
Dietes Grandiflora  (wild iris) is a member of the Iris family - is one of the most giving plants in my garden who rewards me with masses of flowers with minimum watering. In the middle of summer, when the garden struggles against the blazing heat and lack of water, Dietes Grandiflora will bloom with literally a sprinkling of water.  Another bonus is that it multiplies generously .
A few flowers swinging in bottles  - such a simple and pretty way to decorate your courtyard when you entertaining.  When the sun sets, switch on a few fairylights and it will literally transform into a fairyland. 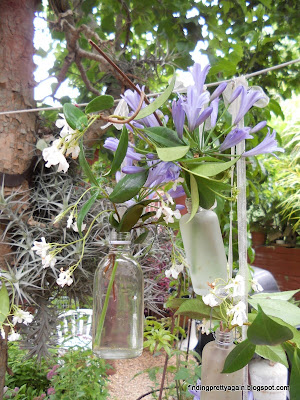 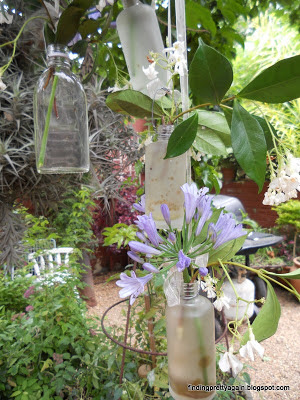 No doubt you can see who won the photoshoot competition in my garden on this day.  The rusted iron bedstead, old wheelbarrow (slightly hidden), a perlemoen shell or two, stones and a mix of plants - even a self-sown figtree - all part another happy corner. 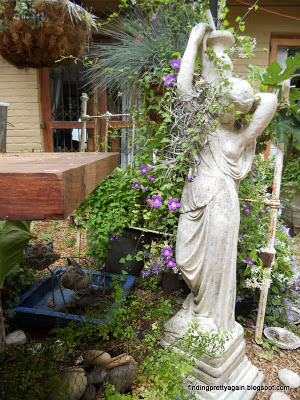 I should think of a name for this statue - she's featured so often. 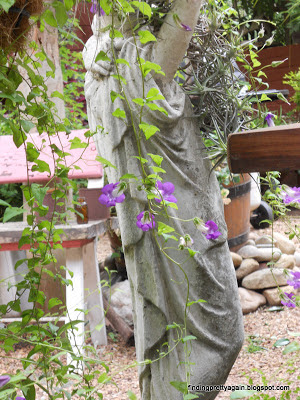 A heart encased with stones plonked in the centre of a maidenhare fern. 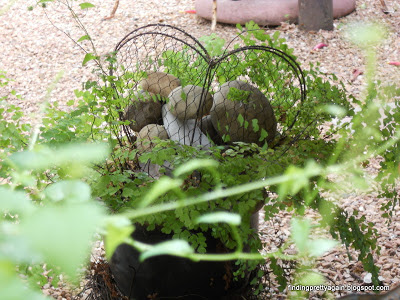 My forever shadow, darling Chester, peeping out behind a jambalaya of dangling bits and bobs. 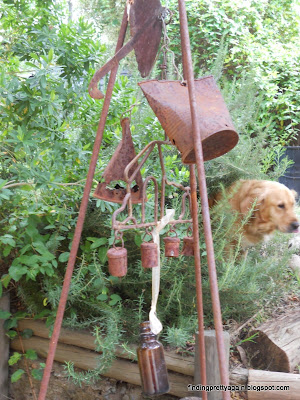 Shells dangling in the wind 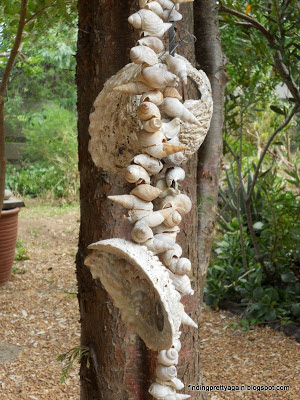 The guinae fowl love to bring their chicks to my garden.  Chester does not bother them at all (I asked him not to). 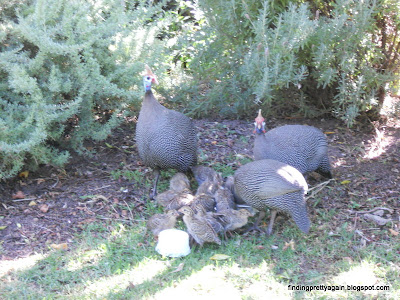 Great snailhunters and cheeky with the rest of the housepets too! 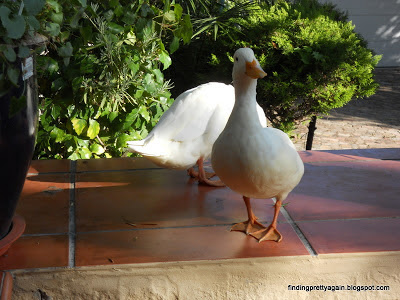 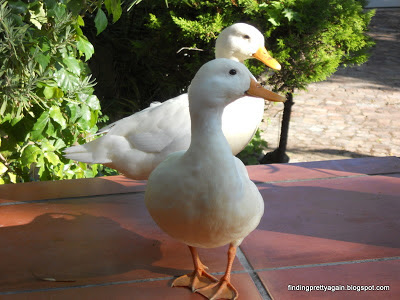 When the strelitzia nicolai become too leggy and overgrown, they get used for retaining soil and to merrily display a few stones for interest.  The Irises are about to bloom. 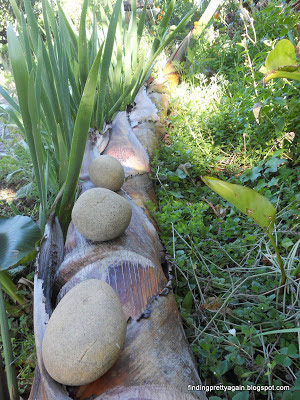 Nasturtiums providing a splash of sunshine underneath the birdbath. 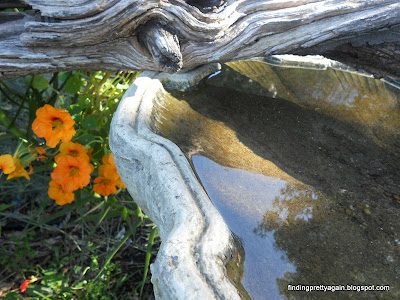 Yes - more than enough "pretty"  in my garden and I love it.

Email ThisBlogThis!Share to TwitterShare to FacebookShare to Pinterest
Labels: Gardens, Pretty Places, Pretty in my Garden

Photographs and words my own. Should you like to share something (with full credit to me and my blog) do drop me a line. 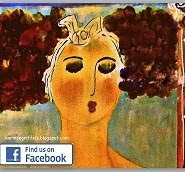 Links to my blog articles and other bits and bobs

we are in
SouthAfricanPlanet
South African guide 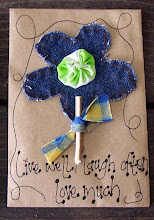